For the bird enthusiasts out there now would be a great time to check out Lake Somerville.

picture below is from flag pond

Here’s a video to serve as a preview to our trip to Dinosaur Valley State Park on 1/11/14. It was a fun day minus the cedar pollen (more on that later).

Barrington Farm is a living history farm similar to the the Sauer Beckmann Living History Farm at LBJ State Park.

If you haven’t been to one of these living history farms I highly recommend a visit. It is educational and entertaining. Ask lots of questions.

The farm still uses the smokehouse. They slaughter a hog in January and smoke meat for the rest of the year.

The farm has a beautiful Polish Crested Red that guards the hens.

There are also two slave houses that are present at the farm.

There is not quite as much to check out at the Barrington Farm as the Sauer Beckmann Farm, but I still recommend the stop.

After our visit to Washington on the Brazos we went right down the road to The Barrington Living History Farm. I’ll have a longer post with pictures coming up. Part of the video below discusses the farm.

On our way home from Houston (Battleship Texas and San Jacinto Monument) we stopped by Lake Somerville State Park.

The park has an office on both sides of the lake. The reason for this is that the lake is very long. It does take some time to drive from one office to the other so if you plan on visiting both offices (path tags at both) make sure you allow for about 45 minutes to get from one to the other. The other key piece of info is that the Birch Creek Unit Office closes at 4:45 pm. We arrived at 4:55 and were unable to get our path tag.

The park and lake are very beautiful. Some trails do need some maintenance. It doesn’t look like they cut some of them back much. Make sure to wear jeans/boots on the more hairy trails as there are some poisonous snakes out and about especially around the shore.

This was one of the trails that looked safer.

It turned out to be the one we saw a rather large water moccasin cross right in front of us.

Again, the lake was beautiful and there were lots of people out enjoying the water.

Plan to spend a weekend at this park to enjoy the lake. Be sure to check the TPWD site for good directions and updates on the water level.

After Washington on the Brazos, we went 17 miles to the east to Anderson, TX to see Fanthorp Inn SHS. 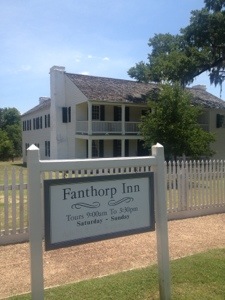 This old inn is worth the drive as are the stories told by its volunteer innkeeper. The inn is only open on Saturday. There is no funding for the inn itself. The volunteer gives tours and sees to the upkeep. The electricity is paid for by Washington on the Brazos. I think after you hear the stories from the volunteer you’ll want to visit the donation box at the entrance. Entry to the inn is free, but a suggested donation of a few dollars each is asked. 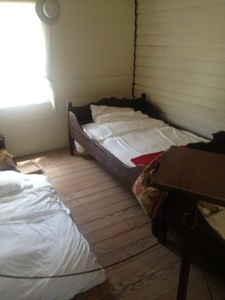 There were some great old firearms in the inn. All of which are original.

You’ll want to take a peek into the cellar at the end of the dining room. There’s a surprise at the bottom of the stairs.

Part of the tour is a visit to the old stagecoach out in the yard. Believe it or not that was a 17-seater. 9 on the inside. The stagecoach started as a mail carrier on the La Bahia. Mr. Fanthorp built his house on the La Bahia and then added on when he saw how much traffic there was on the road. As you’ll see from the size of the place he was quite successful.

Today we visited Washington-on-the-Brazos SHS. The birthplace of Texas.

Be sure to visit the gift shop. It’s one of the largest I’ve seen at a state park.

Every hour on the hour there is a guided tour of Independence Hall.

The guide gives a great explanation of the history of Washington, TX and the story of Texas’ independence.

From there head outside and stop by the obelisk just outside independence hall.

The inscription on one side reads: “The necessity of self preservation therefore now decrees our eternal political separation.”

From there head down the La Bahia road to the Brazos River. The La Bahia was an old highway hundreds of years ago. It’s estimated that people have traveled that east-to-west road for over 300 years.

At the end of this path you’ll see the old fairy crossing at the Brazos. 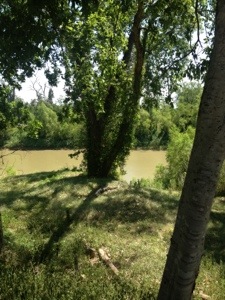 Turn right at the fairy crossing and you’ll see the La Bahia Pecan Tree. This type of pecan is normally found in Mexico. It is believed to be 190 years old.

There was a great amount of history to this park, but not much in the way of trails. There are picnic areas, an amphitheater, and a pavilion.

I made it out to my 16th Texas State Park this weekend. #16 was Stephen F Austin State Park off of I-10 just outside of Sealy, TX.

As with the other parks we’ve visited the Park Store staff were very helpful in planning our outing. We told them exactly what we had in mind for the quick trip to the park and they provided a couple of options that were just perfect.

We wanted a short hike and were directed to the overlook trail at the North end of the park. Park at the restrooms (seen below) and the trail head is on the opposite side of the park road.

There are several options from this starting point.

We went to the right at the first fork, left at the next and followed the trail along to the Brazos River Overlook. (below)

Watch for snakes (we saw one) this time of year and carry lots of water. This was a beautiful park with lots of historical as well as natural features. I’ll follow up with a post on the historical features shortly.

Close to the parking area were these two: 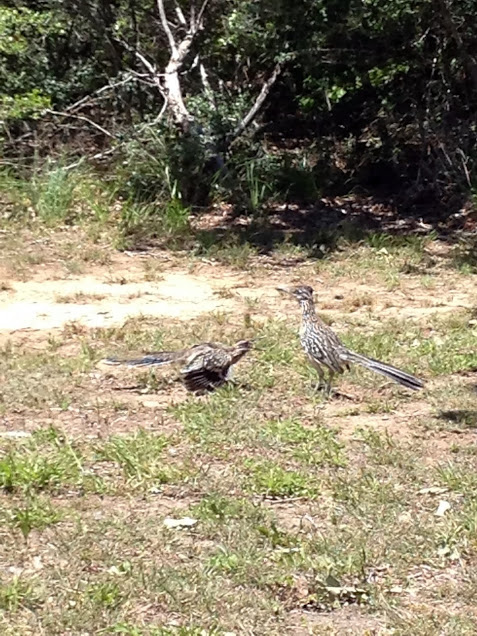 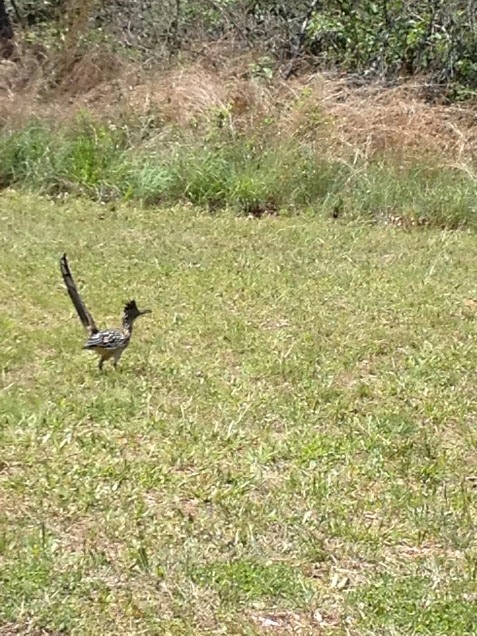 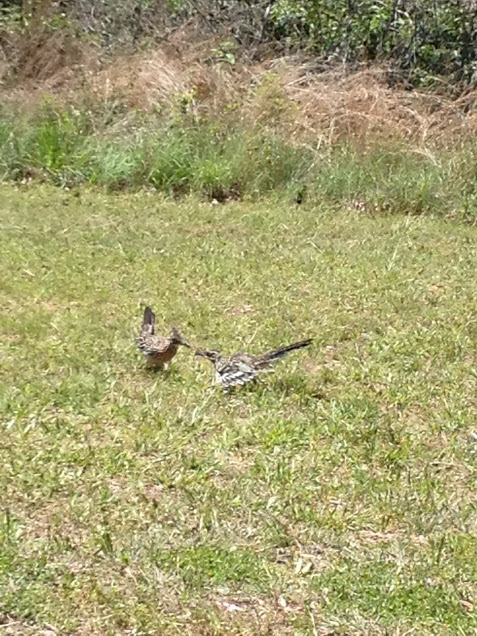 It was a treat to see these two Greater Roadrunners out enjoying the weather.

Before heading to the trail, I checked out the lake. 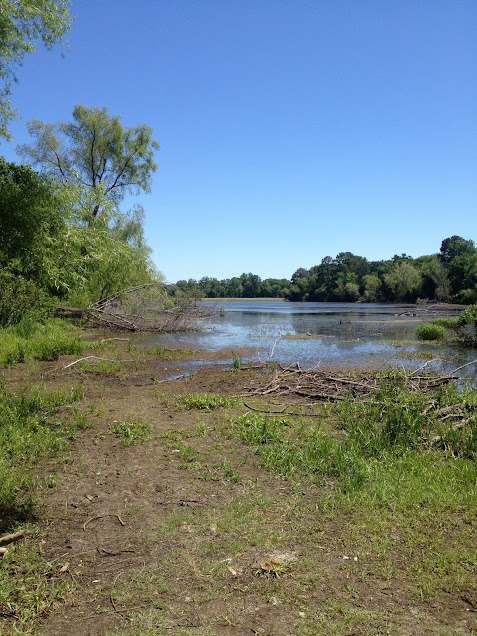 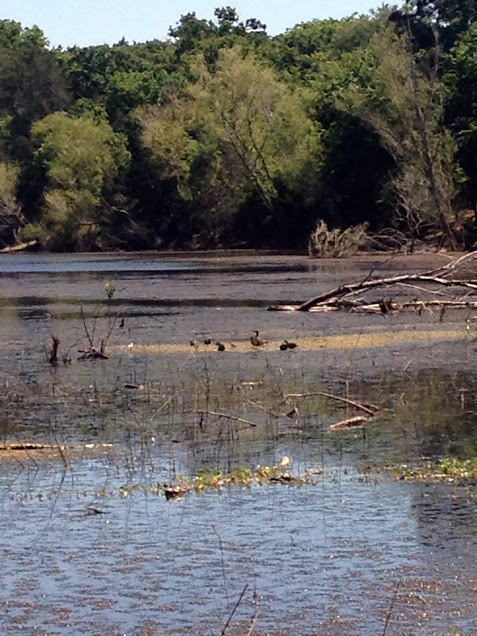 There is a parking lot directly across from the trail head. There’s also a restroom close by. 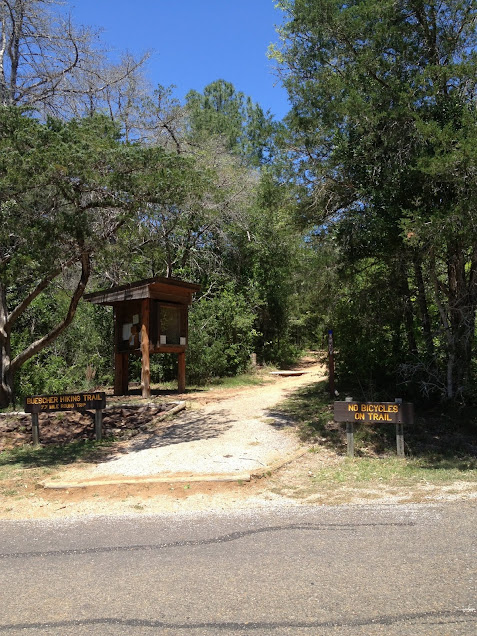 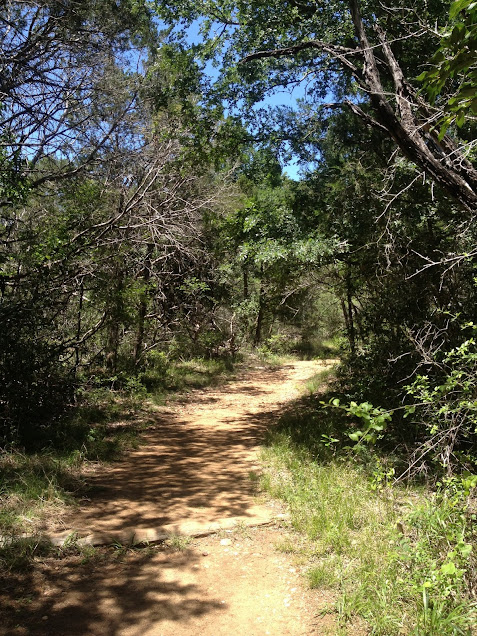 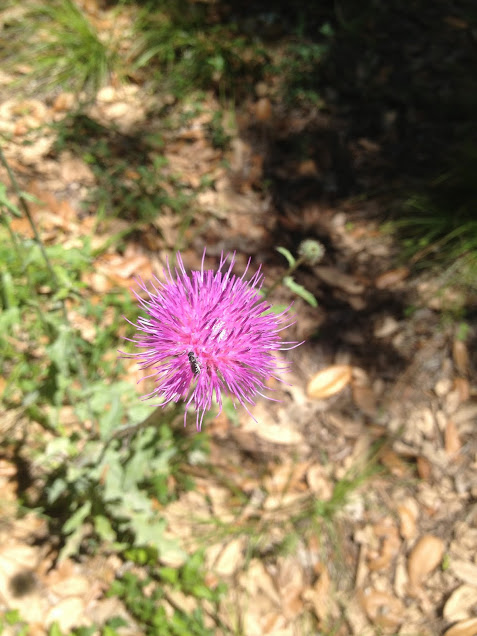 This pipeline was covered in firewheels. Quite the surprise coming out of the forest. 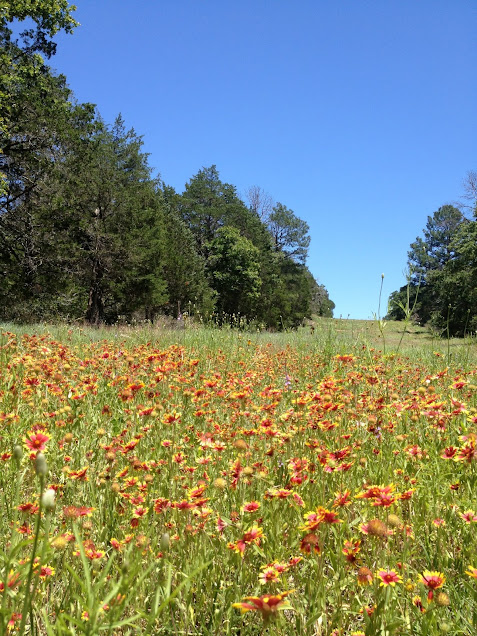 Oh and when you get back to the parking area take a look at the old live oaks across from the parking. 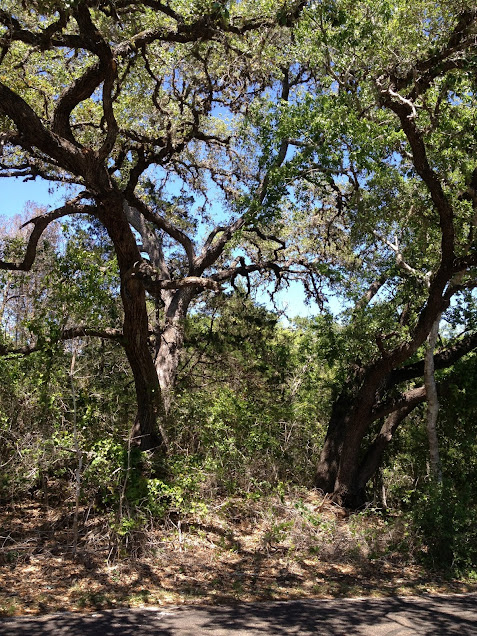 One more thing. It is snake season. I encountered one on this trail and the rangers were sure to warn everyone at the store that they are out and about in the park because of the warmer weather. If you don’t carry a snakebite kit with you on your hikes, do yourself a favor and head to the nearest sporting goods store and pick one up. It’s one of those things you don’t want your family wishing you had with you. By then it’s too late.

On Saturday April 14th, 2013 my friends and I were out on another day trip on our quest to visit all 93 state parks. Originally we planned to do Colorado Bend State Park and then head to Abilene State Park. We spent a little too much time enjoying the treasure that is Gorman Falls and were forced to change plans.

Our detour led us to Mother Neff State Park. We headed to Belton from Lampasas, crossed over Lake Belton a couple of times and found ourselves at the first official state park of Texas. Like many of our state parks, Mother Neff has its own unique history.

We got a map at the temporary headquarters and headed to the trails. The park ranger at the office informed us that there will be a permanent headquarters opening soon so keep an eye out for sign directing you to the correct location if you head out to the park.

The park only covers about 25 acres so we were able to hike all of the trails in about 30 minutes or less. Even though it is small, the park has its treasures that need protecting just like most other parks. The first trail you encounter will take you to the cave that the Tonkawa tribe used as cover during buffalo hunts.

The next trail will take you back to the rock tower near the temporary headquarters.

The park was a CCC project back in the 1930s and there are still numerous buildings standing from that time. When the CCC starting clearing land and excavating sites they found at least 3 Native American burial sites. I didn’t see where the sites were or even if they are marked. The CCC buildings appear to be in good condition. Those guys really did a great job of constructing long-standing structures.

Overall Mother Neff State Park was a beautiful park with lots to offer to every one who visits. I recommend it for a quick secluded hike. Join the park ranger for a guided tour on Saturdays from 2-3 pm.